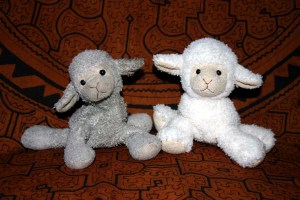 Take a look at this picture of two children’s plush lambs. One is new and the other used. One is white and fluffy while the other is grey and barely holds its shape. Anyone given the chance to purchase one of these would certainly choose to buy the new one. However, in our family, the worn out, discolored, and wilting lamb is the most valuable. The reason? Its name is “Lammy,” The main reason? It belongs to my little girl, Rachel, whose name means little lamb. We bought this stuffed lamb at a store while in seminary about ten years ago. I wanted to buy it for a future baby girl that I trusted God might give to us. Little did I know what we would endure before this lamb could endure the love from our little girl…

Rachel is our fifth child, but she is the third child and only girl living with us on earth. After six years of marriage, Kristin and I rejoiced when we first knew we were expecting. Eight weeks into the pregnancy, we were devastated to lose our first child. We named the baby, Samuel. The message on our hearts was that this baby would belong to the Lord’s presence. During a dark night in grieving the loss of this long-awaited baby, we learned that we were once again expecting. This baby would be born three and one-half weeks early by emergency C-section. After Caleb was born, the doctor revealed that there was a rare condition in the way the umbilical cord was attached to the placenta. In short, it was a miracle that both Caleb and Kristin were alive. Our second son, Jacob, was born five and one-half weeks early by C-section. His 2-week stay in the NICU was not anticipated, and it was difficult to leave the hospital with him still there.

Victoria Grace is our fourth child and first daughter. She lived into her sixth day before a major birth defect with her brain shortened her life with us on earth. Yet it was a miracle that she even lived with us as long as she did when the doctors indicated she would only live minutes to hours after the C-section. Victoria truly belonged to God as His beautiful servant, and her life continues to serve His purposes today through Victoria’s Little Lambs Fund by providing medicine for sick children throughout the Peruvian Amazon and Ethiopia.

Rachel was born by Kristin’s fourth C-section. The morning of her birth was an emotional struggle anyway because of the previous dark night we experienced the morning Victoria was born. However, Rachel’s birth would become a dark night of its own. During the operation, the doctor discovered another very rare condition in which the placenta had grown into the wall of Kristin’s uterus. This caused significant concern for the safe delivery of the baby and also the safe recovery for Kristin. Rachel was delivered, and she was healthy. Kristin’s condition was more precarious. After the surgery and time in recovery, Kristin was suddenly in great pain, and she was struggling to maintain consciousness. She was hemorrhaging internally and was rushed into emergency surgery. After receiving four units of blood just to stabilize her, they did an emergency hysterectomy. In a follow-up appointment weeks later, the doctor revealed that only a miracle could explain how she did not hemorrhage earlier in the pregnancy due to the thinness of her uterus where the placenta had grown into it (it was 4 mm when it should have been 2 inches).

Victoria’s death was the saddest day of my life, and Rachel’s birth was the scariest, because I almost lost Kristin and Rachel. This experience followed a dark night experience in our lives. In began during the five months leading up to Victoria’s birth and death and continued for a year or two after. Yet in the midst of the night, the light of hope and peace and life in Christ radiated brighter than ever before. Our lives were transformed. The simplicity, joy, and love for God and one another and from others that we experienced are hard to put into words. We could only belong to Him as His servants. Our lives, though used and “tried” like Lammy, grew in value because we received the revelation of belonging to Him.

This past weekend, I read a book by Jerry Sittser called, A Grace Disguised. He writes of similar revelation and growth during the excruciating and catastrophic loss he experienced. In reading his story of his dark night, I felt like I was once again back in the dark night with bright light, and I was grateful. The perspective is a gift I will always cherish. Belonging to God together for eternity is a hope that will always be our family’s destiny.