On this leap day, during the 12th anniversary week of Victoria’s life on this earth, we would like to share our hope of belonging together in our Father’s family. Below is a reflection that currently opens chapter two of a book I (Mark) am currently writing, provisionally titled, God’s Victory by His Grace: A Story of Beauty, Brokenness, Belonging, and Blessing.

A leap day adjusts for the earth’s orbital revolution around the sun, which actually takes about six hours longer than 365 full days. Victoria’s six days on earth included a leap day, both adjusting and fulfilling our understanding and experience of family. Broken families began with the fall of God’s very good creation. This brokenness manifests itself in all the different forms and functions of family. The shame that separated the first human beings from the Creator and one another persists in dysfunctional family systems to this day.

However, God has not abandoned the family, but He has redeemed it. Joseph Hellerman encourages us to “view God’s work in human history as primarily group-oriented,” with the result that Father God “through His people . . . would fully and finally receive the glory that is His due.”[1] Redemptive family reveals a new group in the New Creation for God’s glory.

The formation of this family group in the Kingdom of God requires redemption and restoration from seemingly endless expressions of brokenness and shame. Yet good news confronts brokenness with a limit, called death. Though difficult to interpret death as good news, without it disorder would have no end, and chaos would be our destiny; but death itself is an end and has an end. For this reason, the Creator cast the first family from His presence, so that the deception and destruction of death could reach its end, and a pathway to the tree of life in God’s presence could be restored (Gen 3:22–24).

Therefore, redemptive families have no end. They find hope in knowing a good Father, receiving comfort from His Spirit, and following His Son into new and never-ending life. His victory by His grace holds forth the promise of becoming part of His redemptive family. We cannot join His family without first facing our brokenness that keeps us from Him. A common human struggle exists in the experience of natural family. From humankind’s shared family of origin in the opening chapters of Genesis to each one’s immediate family of origin, pain and shame persist. We long to belong to a Father who graciously buys us back (redemption) and makes us victorious members of His family!

Belonging together to Him, 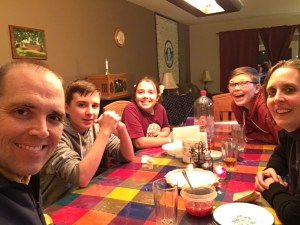